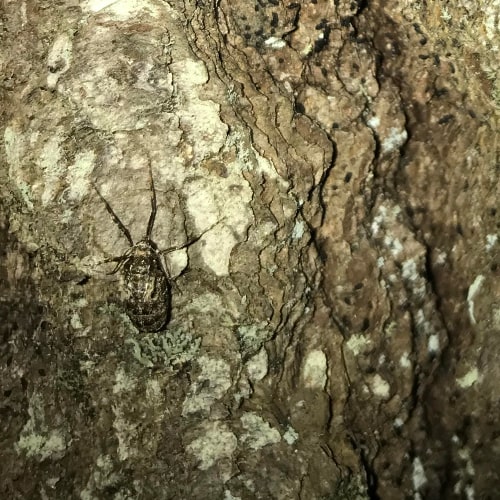 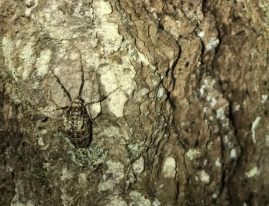 A native of Europe and Western Asia, the Winter Moth was introduced to North America via Nova Scotia, and in the past decade has exploded in population in coastal New England. Adult moths hatch from their cocoons in late November. The flightless females crawl up trees to lay their eggs; one female can lay up to 350 eggs. When the eggs hatch in spring, the caterpillars feed on emerging buds, flowers and leaves. If defoliation is severe enough, a tree will force a second growth of leaves in the summer, which weakens the tree; if this happens for two or three successive years, the tree may die. In Cape Elizabeth, Winter Moth has already killed thousands of trees, and the infestation has been growing.

The onset of Winter Moth mating season in late November is heralded by swarms of male Winter Moths fluttering around porch lights, and the season will continue on warmer evenings into January unless stopped sooner by the ground freezing or snow cover. The 2017 mating season effectively ended early, with a 6” snowfall on December 9 followed by below-average temperatures for the rest of the month. 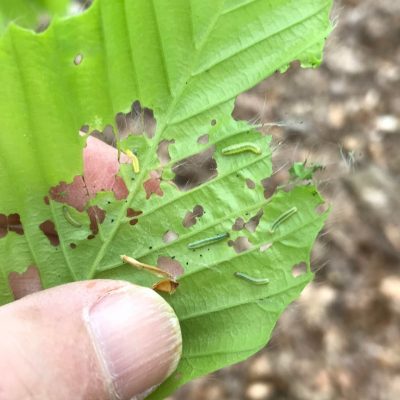 Adult Winter Moths are most active in the evening. The flightless females emerge from the ground and climb trees (and anything else) to lay their eggs, emitting pheromones to attract males who mate with them as they climb. Once the females lay their eggs, they die, and another group emerges the next evening. Look for the females on tree trunks and foundations with a high-intensity flashlight (an iPhone works well) in one hand – and have a stubby stick in the other hand to crush them. Females can be difficult to find on tree bark, but the presence of males is a sign that females are near. Usually, males land facing up, but to mate will face down the tree and back into a female as she continues her relentless climb, so looking for upside-down males will help identify females.

A parasitic fly, Cyzenis albicans, has been effective in controlling winter moth elsewhere, and two batches have been released in Cape Elizabeth. The fly lays its eggs on young leaves that are eaten by Winter Moth caterpillars; the fly larvae then feast on the pupating Winter Moth in its cocoon and emerge the following spring. Unfortunately, the fly takes a number of years to become sufficiently established to hold the Winter Moths in check, so current control efforts target the female moths as they climb.

The Cape Elizabeth tree warden recommends banding trees with one of several sticky-tape products to trap the climbing females. The bands should be installed about four feet above the ground in mid-November, and some form of batting may be needed on trees with rough bark, such as mature oaks, to keep the females from climbing under the bands. Dispose of the tree bands in the trash before mid-winter so any eggs laid on the bands or the batting material do not hatch in the spring.

In the spring, before leaf-out, the Cape tree warden suggests applying dormant oil spray on tree trunks to suffocate the eggs. This spray is available in local hardware stores, or it can be applied by a commercial arborist. Unless a tree was so defoliated that it forced a second leaf growth the previous year, the tree warden does not recommend spraying with an insecticide in the spring, when caterpillars are eating the leaves, because so many beneficial insects are also active then. 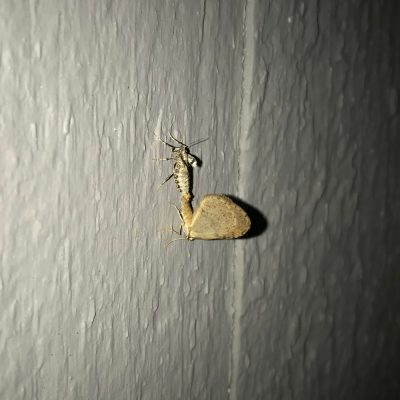 BugBarrier Tree Band® (www.treebands.com) is a wide, inward-facing sticky film installed on a double layer of batting that should be ordered with the film. Distributors include Shelter Tree Care Products in North Attleboro, MA, (800) 720-8733, www.sheltertree.com, and American Arborist Supplies in West Chester, PA, (800) 441-8381, www.arborist.com. BugBarrier® is relatively easy and quick to apply, and as the sticky surface does not face outward, it is often preferred in public spaces like Fort Williams Park. Application Instructions (pdf)

Tree Tanglefoot® Insect Barrier (www.tanglefoot.com) is a sticky paste that comes in a plastic tub, to be applied with a putty knife to Tanglefoot® Tree Band wrapped around the tree and secured with twine (do not apply paste directly on the tree). The paste and the band are widely available; locally, Drillen Hardware at 460 Cottage Road, South Portland, stocked extra this year. Tanglefoot® is fussier and takes longer to apply than BugBarrier Tree Band, but is less expensive.