Linking the first two completed Ecology Project sites at either end of the Cliff Walk are two acres of rugged and densely vegetated east-facing slopes exposed to open ocean and onshore winds. Invasive plants are at their most prolific here, dominating desirable vegetation and degrading wildlife habitat. Of all the Project sites, this one most dramatically demonstrates the problems the Ecology Project was designed to address.

Guided by a landscape management plan completed in June 2015 by landscape architect, Regina Leonard, the Friends of Fort Williams Park began implementing a multi-year ecological rehabilitation of this site in fall 2015. Work involves suppressing invasive plants while preserving and expanding existing native plant communities across the landscape. A key objective is to diversify the species, structure, and vertical layering of native plants to improve valuable food sources, cover, and nesting opportunities for birds.

This project also includes the light-handed improvement and expansion of a network of trails and overlooks – completed in 2018 by OBP Trailworks – to improve access, preserve view sheds, and offer more opportunities to appreciate the flora and fauna of this unique coastal site. 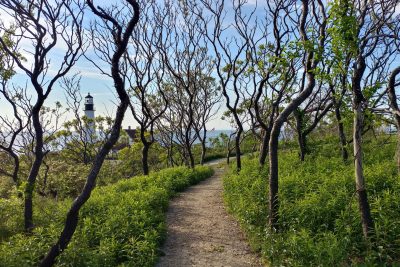 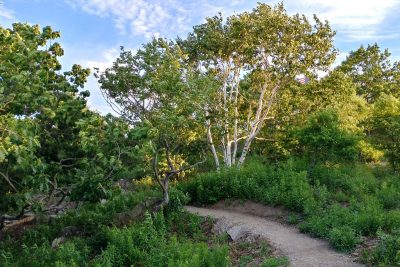 There are at least two invasive Asiatic species of bush honeysuckle in Fort Williams Park, plus a hybrid of the two. Introduced to the United States in the early to mid-1800s for ornamental horticulture, honeysuckles are medium to large deciduous shrubs with small, egg-shaped leaves; fragrant white, yellow and pink tubular flowers in June; and red or orange berries that ripen in mid- to late summer. Stems of mature shrubs are hollow, whereas the stems of our native honeysuckles have white interiors.

Asiatic bush honeysuckle is highly invasive because of its adaptability and rapid rate of growth. It forms dense thickets in disturbed sites that spread into fields and woods, preventing sunlight from reaching the ground and thereby reducing the diversity and abundance of native species. Its berries are high in carbohydrates but low in fats and nutrients, so although they are very attractive to birds (the primary means for distributing the seeds), they don’t sustain migration in the way that many native plants do. This is especially a problem along coastal sites such as Fort Williams Park that would otherwise provide important habitat for these migrants.

An evergreen tree common throughout Eastern North America, eastern red cedar is often one of the first woody plant pioneers of abandoned fields, rocky hillsides and dunes. Its size and habit varies from narrow conical trees in open upland areas to low windswept shrubs along the shore. There are several such Eastern red cedars growing along the spine of the Cliff Walk Landscape, including one naturally-occurring variety that is growing prostrate across a mound of concrete and masonry ruble.

The dense, aromatic foliage of Eastern red cedar is green to blue-green in summer, and often turns purplish-brown in winter. It provides excellent protection and nesting cover for birds. Female plants produce pale blue, berry-like seed cones that are an important source of winter nutrition for several bird and animal species, chief among them the aptly-named Cedar Waxwing, and the American Robin, both which are the prime means for distributing juniper seeds across the landscape. These “juniper berries” have been used to flavor gin since the mid-1600s.